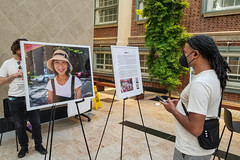 June 15, 2022
As part of This Is NY: Celebrating Our Immigrant Heritage and Communities, we presented an exhibition with text, photos, and audio from immigrant participants in 34th Avenue Oral History. MORE. 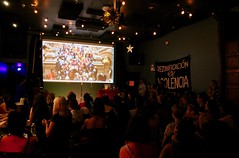 July 13, 2019
Muslim Sisters of Staten Island brought the first ever comic convention to the borough, and our Geek Out Board created a space for Staten Islanders to connect over the things that make them geek out. MORE. 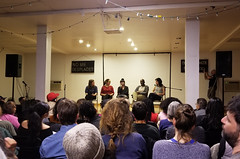 February 22, 2019
We displayed an interactive “Bushwick Love Letter” station at Mayday Space’s community screening of the documentary “Decade of Fire”, tracing how displacement impacts our neighborhoods from the South Bronx in the 1970s to today’s struggles in Bushwick. MORE. 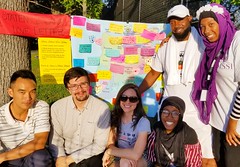 August 25, 2018
At Muslim Sisters of Staten Island and Baitul Jamaat’s Community Eid Celebration, we set up a “Staten Island Love Letter” station with a borough map where people posted love notes to the borough. MORE. 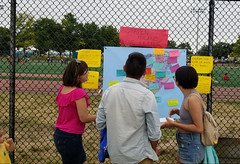 July 21, 2018
“La Isla Bonita” is an annual summer festival that celebrates the beauty of Staten Island, produced by LMProject and ISLA. The Five Boro Story Project’s “Staten Island Love Letter” station invited people to write love notes to the borough and hang them on a map. MORE. 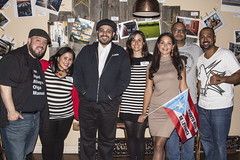 November 30, 2017
The #QU4PR fundraiser, organized by Queenscapes, featured Nuyorican storytellers and poets who told tales of Puerto Rican culture and Queens community, along with a photo exhibit, live painting, raffles, and wine tastings – all to benefit victims of Hurricane Maria. MORE 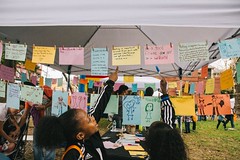 October 14 & November 12, 2017
We joined the Center for Traditional Music and Dance‘s “NY Voices, NY Votes” festival series celebrating the centennial of women’s suffrage, and gathered stories about what it means to be engaged citizens in the neighborhoods of Stapleton, Staten Island and Jamaica, Queens. MORE 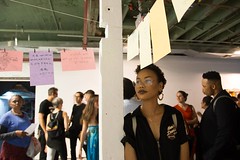 October 6, 2017
The Building Stories exhibition of recent works by fellows in More Art‘s 2016 Engaging Artists Fellowship included videos from the FBSP’s LIC & Astoria Love Letter event, and we organized a story circle at Flux Factory in tandem with the exhibit. MORE 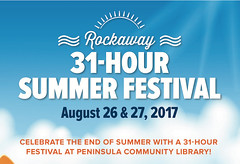 August 26, 2017
During the Queens Library’s 31-Hour Summer Festival celebrating the end of summer at the Peninsula Library, the FBSP held a story circle to share neighborhood memories. MORE 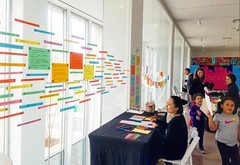 Celebrating 50 Years of Integration in Queens

April 23, 2017
With Queens Memory, we invited visitors to the Queens Museum to find their community on a giant puzzle map of Queens, and write reflections on their home stretch of the borough to create an interactive testament to the most diverse place on the planet! MORE. 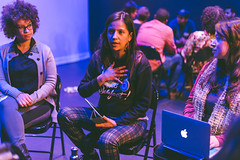 February 1, 2017
As part of the USDAC’s 2017 People’s State of the Union, we held a story circle where people shared stories about when we’ve felt belonging (or the opposite) in this nation, times we broke through a barrier to connect with someone different from ourselves, and insights into the state of our union. MORE. 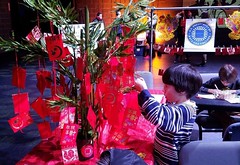 Radical Hope for the Year of the Rooster

January 28, 2017
January 28, 2017, marked the first day of the Year of the Rooster. Roosters are known for their courage. At this family workshop, people of all ages wrote our radical hopes and courageous acts that we’ll take in the new year. MORE. 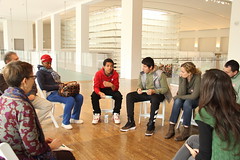 October 22, 2016
This story circle workshop examined the value of Flushing Meadows Corona Park through shared stories and discussion about the park’s past, present, and future. “Our Park Stories” was presented with Queens Creative Solidarity as part of their Studio in the Park residency at the Queens Museum. MORE. 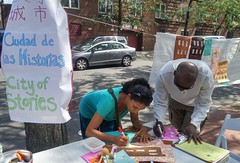 August 21, 2016
“City of Stories: Jackson Heights,” a participatory installation and collaboration with Fragile City and “A Living Room on Roosevelt / Una Sala en La Roosevelt,” invited passerby to write stories responding to questions about what makes us feel at home, the power of immigrant communities, and memories of moving to Queens. MORE. 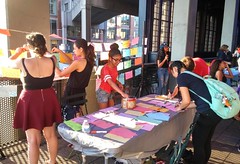 July 14, 2016
Produced by teens and for teens, “Wanderland” promoted creativity, travel, and path-finding for young New Yorkers with storytelling, art-making, dance, and music. At our story station, teens shared stories of traveling within NYC and abroad. MORE. 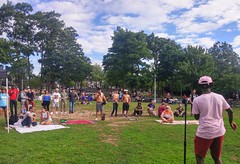 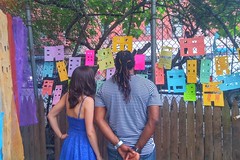 City of Stories: Lower East Side

June 24, 2016
As part of the Clinton Street Fest, “City of Stories,” an interactive installation and collaboration with Fragile City, invited people to take paper buildings and write Lower East Side stories, memories, reflections, and wishes for the future of the neighborhood, and hang the buildings to create a city made up of everyone’s stories. MORE. 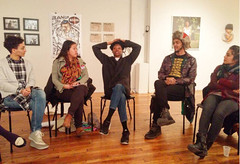 February 13, 2016
Produced as part of BronxArtSpace’s show “SpeakOut,” this workshop brought together South Bronx residents to share stories about policing and gentrification in the borough, imagine alternatives, and map out our ideal futures. MORE. 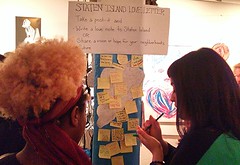 January 31, 2016
“VIRAL” featured art, music, and poetry performances that were all about spreading love, while critically examining censorship and police brutality. VIRAL was the setting for our first “Staten Island Love Letter” activity, which invited people to write love notes to Staten Island. MORE. 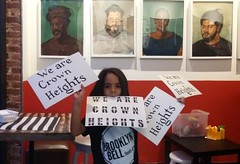 January 31, 2016
The “We Are Crown Heights” Winter Warmer and Ice Cream Social brought neighbors together for ice cream, music, story sharing, and discussion about what the people and neighborhood of Crown Heights truly need. MORE. 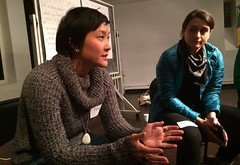 January 27, 2016
As part of the USDAC’s 2016 People’s State of the Union, we held a story circle where people shared stories that the next President needs to hear, and discussed the state of our city and country. MORE. 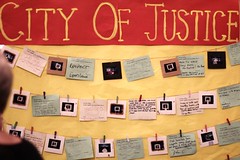 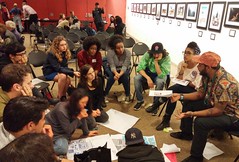 June 2, 2015
The first “Imagining” brought together nearly 300 New Yorkers to consider what our neighborhoods could look like when housing justice is realized, and strategize on what we need to get there. MORE 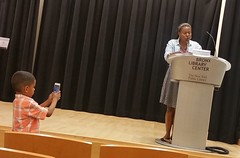 May 30, 2015
The FBSP hosted the Bronx Book Fair’s open mic at the Bronx Library Center. MORE 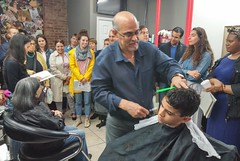 May 21, 2015
Organized by FABNYC, “LES Love Mob” brought attention to the community and culture of Clinton Street with an artist-led walking tour of small businesses. The FBSP moderated a panel of Lower East Siders who shared stories from Clinton Street. MORE 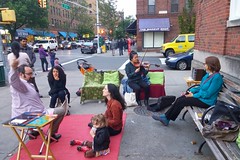 May 14-17, 2015
With artist Jeanne van Heeswijk and the Queens Museum, “Public Faculty No. 9” engaged people in Elmhurst, Jackson Heights, and Corona in conversations about connectedness in Queens. MORE 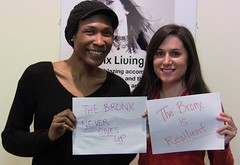 Jan 24-29, 2015
As part of the USDAC’s 2015 People’s State of the Union, community members came together for story circles in Staten Island, the Bronx, and Washington Heights to share personal stories about our neighborhoods, and discuss issues in our communities and our country. MORE. 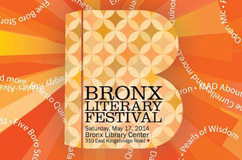 May 17, 2014
The FBSP hosted the 2014 Bronx Literary Festival’s open mic during a full day of readings, workshops, dance performances and panel discussions at the Bronx Library Center. MORE