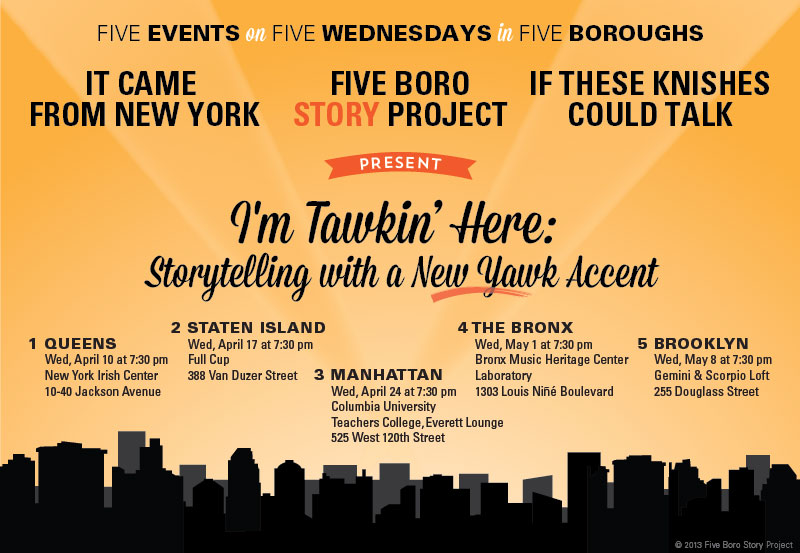 Spend just one day in the Big Apple and you’ll come away with at least one story. So imagine the tales the locals have to tell!

Marking the launch of the Five Boro Story Project, “I’m Tawkin’ Here: Storytelling with a New Yawk Accent” is a citywide celebration of all that is New York in story, music and film.

“I’m Tawkin’ Here” traveled through the boroughs on five consecutive Wednesdays, from April 10th through May 8th, 2013, promoting the culture of each borough: the history, the stories, and the accents.

Each event featured a musical ode to the borough and true stories from “Natives” and “Transplants” — two groups that live in the same city but often know little about each other. The evenings concluded with a sneak peek of “If These Knishes Could Talk,” the definitive documentary on the New York accent, which has been featured in the WSJ, NPR, NBC, CBS and NY1.

Although New Yorkers are known as straight shooters, “I’m Tawkin’ Here” offered a chance to wax poetic about our boroughs. The series brought New Yorkers together for five nights of great storytelling, music and film that prove our bridges and tunnels (and ferries) are more than mere methods of escape, but are in fact connectors of culture. 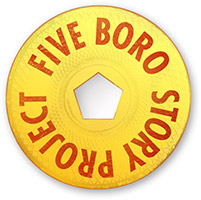 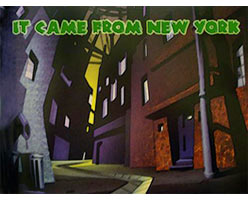 Events take place on five consecutive Wednesdays, beginning at 7:30pm.
All events are free and open to the public.

Whet your appetite with this “If These Knishes Could Talk” trailer

Featuring the return of Michele Carlo’s storytelling series “It Came From New York,” along with excerpts from “If These Knishes Could Talk,” the definitive documentary on the New York accent by Heather Quinlan.

Leading up to the May 2013 Art Of Brooklyn Film Festival premiere of “If These Knishes Could Talk,” a series of events in each borough will bring New Yorkers together to share their neighborhood stories and celebrate the history and culture of the five boroughs. With its all-native New Yorker (and one “token” non-New Yorker) cast, “It Came From New York” speaks with the voices of the melting pot, sharing insight into what it was like to actually grow up in the place everyone moves to. “Knishes” presents a visual and aural connection of the city’s history, people and communities, as it chronicles the origins and evolutions of the “Noo Yawk akx-sent.” Channeling the powers of storytelling and film, “It Came From New York/If These Knishes Could Talk” enlightens, entertains and proves that instead of being mere modes of escape, our bridges and tunnels are in fact, connectors of culture.